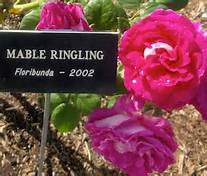 This ruffly and lush yet balanced rose named for Mable captures her essence. (Photo courtesy of Judy J. Wells)

As a fascinating public person, Mable was said to have been quite private about the fact that she battled two potentially life threatening illnesses,diabetes and Addison’s disease, for which there are still no cures. In the face of so little factual information I am going to go out on a limb to suggest a narrative about the motivation of this energetic and visionary woman. When we are young and healthy we may forget the universal truth that from the moment we are born our life is ending. I believe Mable’s optimism, focus and attention to detail was closely rooted in the fact that she may have been more acutely and existentially aware she was living on borrowed time.

Though we have no record of her doctors or medical treatment, it would make sense that Mable had access to the best care at the time. Experimental modern breakthroughs with insulin came about in the 1910’s-1920’s, that surely helped her better manage symptoms such as physical weakness and fainting spells. That said, a purpose driven life and a great attitude in a patient never hurts. Neither ailment appeared to slow her down, and in fact they may have been the inspiration to transcend her circumstances to live life ‘con gusto.’

As the dictionary says, ‘with zest,’ is the lasting impression of Mable after visiting ‘The Ringling’ on a recent visit. To defy obstacles and lead life with an inner fire of enthusiasm, relish, appetite, enjoyment, delight, glee, pleasure, satisfaction, appreciation, zeal, fervor, verve, keenness, and avidity; these are qualities important as ever to possess and cultivate today.

We actually know relatively little about this inspirational woman whose story touched me so deeply when we toured Ca’ d’Zan and the Ringling Museum in Sarasota, Florida, just before the winter holiday season took off in full force.

An informative video about Ca’ d’Zan.

Our docent on the Mable Tour, Marilyn Conner, informed us that one reason we know so little about Mable, hence so much conjecture about her life, is that upon husband John’s death in 1936, Mable’s family removed all of her personal papers from Ca’ d’Zan. Though named after John, the Italianate villa they shared was essentially America’s first model home overlooking Longboat Key, which the Ringlings owned in its entirety at the time. This islet, now brimming with high rises, is in full view from the rear windows of Ca’ d’Zan. Buyers were brought to the mansion to discuss and then ‘seal the deal,’ according to another informative docent, Sally Theis. 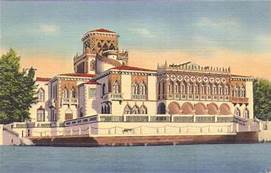 Entrance by water view of Ca’ d’Zan as it looks today overlooking Long Boat Key in this vintage postcard.

The home was said to have been Mable’s brainchild, while the museum was John’s ‘baby.’ It took only two years to build this lavish home in which no expense was spared inside or out. 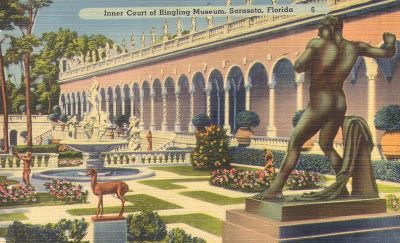 A vintage postcard view of the inner court of the Ringling Museum with one of the largest holdings of paintings by Rubens (1577-1640) on permanent display as well as modern art, including political and provocative temporary exhibits.

It was not recommended for people with Mable’s condition to have childrenwhich may have also fueled the Ringling’s sociability and desire to surround themselves with others interested in music, art and merry making. The childless couple entertained frequently, but Mable lived there for only 3 ‘seasons’ until her death at age 54. I would go further to suggest that Mable’s desire to be part of John’s business ventures, her attention to detail and productivity was a way to be in the ‘flow’ losing her sense of time passing and a way to distract herself. Keeping busy was a way to beat the clock, rather than passively feel victimized by the unfairness of being stricken with her illnesses and the accompanying symptoms, discomforts and worries.

Mable must have been extremely mentally and emotionally strong having two life threatening diseases not knowing how long she might live as modern cures were just coming into being toward the end of her life. Mable traveled widely after she left home in her 20’s leaving behind a rural existence secure in relationships, one of 7 close siblings until the end, 5 sisters and a brother. She left Ohio for the big city of Chicago where she is said to have been a waitress in a fine restaurant where she also may have had access to a better diet. Waiting on tables, there might be fresh orange juice, for instance, needed to maintain her blood sugar to combat fainting spells. The physical exertion of serving not only provided decent wages, it kept her on her feet and active, also good for her serious medical conditions. 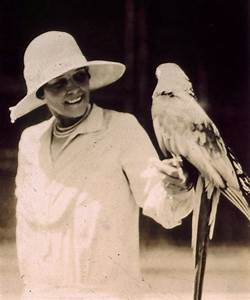 Mable Burton Ringling’s story fills me with respect and awe. Some day maybe her heirs will release her personal papers and correspondence for a definitive biography to emerge.

It is said that John and Mable met in a tony Chicago restaurant, Mabel waiting on John, already a successful businessman when they married on December 29, 1905. The fact that I am writing this on the eve of their 122 anniversary when she was thirty and he was thirty-nine is something to behold. John was wildly successful with his brothers in the circus world investing the cash flow into railroads that transported the circus and then cattle ranching. To round out the medley, they became real estate developers in Florida.

How savvy. Think of the Ringling name recognition already in place. By all accounts Mable and John’s marriage was a happy one in which they delighted in their shared interests in travel, scouting out new acts and picking up art at auction, becoming educated in the process. Turning rejection into a win, they wound up in the undeveloped area of Sarasota because they were snubbed by more landed gentry, such as the Ford family, who had already made other parts of the Gulf Coast their winter getaway.

I am going to go out on a limb here a bit with the ‘outsider’ status of both John and Mable. Like her husband, Mabel Burton Ringling was a woman of humble origins. Being snubbed by society may have been a great gift and only spurred their ambitions rather than held them back. More than this, perhaps Mable identified with the differences and ‘deformities’ of the circus performers themselves and how they overcame their disabilities in becoming performers. Perhaps Mable’s illnesses helped her shed any self consciousness or shyness about going after a full life. Perhaps we will never know.

We do know that the construction of Ca’ d’Zan as well as the running of it created an economy of its own. Even though land development proved to go through periods of boom and bust, the Ringlings helped to jump start the process almost 100 years ago.

What we do know for sure is that during their travels John and Mable fell in love with the grace and grandeur of Venice, Italy, that translated well in Florida. With this stimulation intact Mable oversaw every aspect of the construction, from the choice of golden Sienna marble from Tuscany for many of the floors, walls and staircase banisters, to the gem tone stained glass windows casting dancing shadows on the black and white marble floors, to enhance the interior decoration. Mable was reported to love the color green, the color of new life and crisp dollar bills. The custom made bright green throne-like dining chairs still pop.

As the Ringling website notes, “She designed much of the original landscaping on the grounds of the estate, including her Rose Garden and Secret Garden. And while the house was to be called Ca’ d’Zan, Venetian dialect for “House of John”, it was really, as one writer later observed, truly “John’s love letter to Mable.”

The house, completed in 1926, soon became the site of lavish musicales, as well as garden and dinner parties. There were Gatsby-esque parties that lasted till dawn, with an orchestra playing from the Ringling yacht moored just off the marble terrace, entertaining guests such as the Governor of New York Al Smith, comedian/philosopher Will Rogers, New York City Mayor Jimmy Walker and famed producer Flo Ziegfeld and his wife Billie Burke, best known as Glenda, the Good Witch in The Wizard of Oz.”

The tradition at The Ringling continues with live concerts, some in the historic Asolo Theater as well as outdoor DJ inspired dance nights. That’s not all, there are yoga sessions, stroller tours, lectures and a book club. I can just imagine Mable being tickled pink by these developments and for good reason.

Also from the Ringling website: “Suffering from diabetes and Addison’s disease, Mable passed away on June 8, 1929. It was a loss from which John never really recovered. They had found in one another a shared love of travel, art and culture, of things Italian and of Sarasota, where this remarkable woman left the rich legacy we are fortunate to still enjoy today.”