On December 31, 2018 it will be seven years that my sister, Daryl returned to her God and left us, her family, brokenhearted. Hold tight to God’s unchanging hand was a line I heard a lot, along with ‘to be absent here is to present with God,’ or something like that. Neither helped me. I know people meant well but I was not in the space to hear any of it; in one ear out the other.

I was telling myself, my mother, and my other sister; I just want it to be a year later so then I’ll be through it all; it being grief. Lord if I had known then what I know now I probably would have lost my mind. There is no ‘being through with it.’ I have found that grief has become a part of my life. Some days are good, some aren’t, and then some are great. The part of grief that surprises me is the sudden, out of the blue, crashing wave that can be triggered by a song, a joke, a memory. When that happens I am no good for a little while. Sometimes it is prolonged other times it disappears as quickly as it came. There is no hard and fast rule. Grief just shows up.

Yes there are the seven stages of grief that everyone travels through (see below). Know that you will go through these stages but not necessarily in order. And you will experience different levels of intensity. I still feel shock sometimes like it happened yesterday and I wonder how I’ve made it this far without her on this earth. Some days my anger flows out of me like lava, quick and hot. While other times the anger is a slow burn and consistent throughout the day and nothing I do will make it disappear before it’s ready to go. 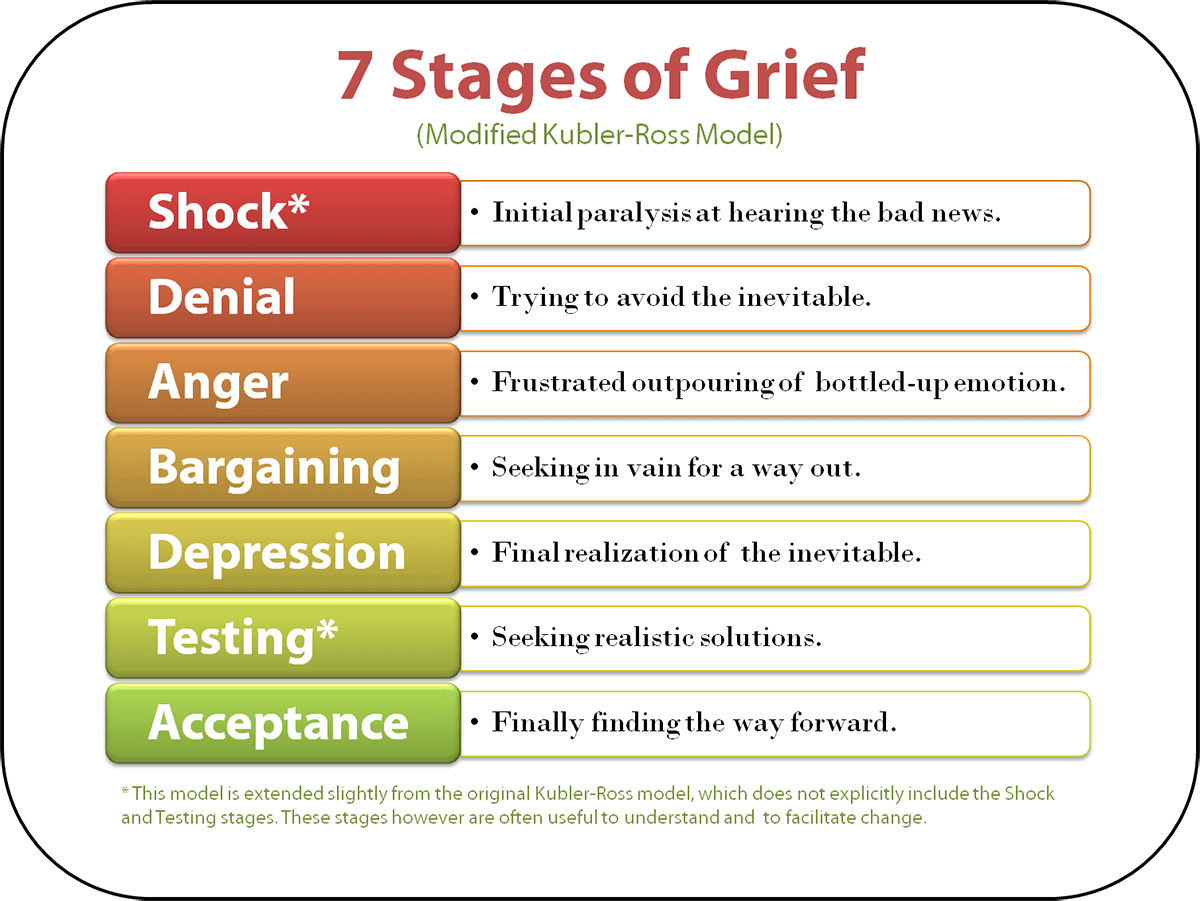 Grief for me is a crap-shoot and that has been the most discombobulating thing about this journey; not knowing which feeling is going to show up at any given time. But I’ve had to figure it out. Most people say one day at a time. In the beginning I said one second at a time, which served me. I’ve worked my way up to one day at a time. But that too can change at any time.

I can’t control how grief will present itself emotionally on any given day or any given moment. What I do is: acknowledge it, accept it, even when I don’t want to, and then react to it in any way that is for my highest good. I don’t judge myself. And I don’t allow anyone else to either. I do not allow anyone to say ‘You should be over it’ to me. Nope. No one gets to decide when or how I feel about the loss of my sister. I do understand why people do that though. They need to see you overcome, survive, make it to the other side just in case it happens to them. I say fuck that and fuck them. This is my grief journey and no one will dictate to me how I feel or how I deal with it.

I will say I do smile more than cry these days. I remember hearing those words from people who were trying to help me. And I always wanted to scream, ‘Shut the fuck up.’ Sometimes it is just best to say, ‘I don’t know what to say, but I’m praying for you. I’m thinking of you. I wish I could take this pain from you.’ But in the end I have gotten to that place in my journey where I do smile more and quicker than I used to when I think of Daryl. She and I shared some much laughter together so for me laughing seems natural. Finally.

I have a family friend, she’s older, my mom used to take care of her son, and she lost her sister. One day I ran into her, when the loss of her sister was still fresh and she asked me, ‘Does this get better?’ I hesitated for only one second and then said, ‘It changes but it never goes away.’ She nodded as if she already knew that truth but was hoping that maybe, just maybe I would say something different. I wished I could have given her something different I wished I could have lied but that’s not my way. Truth is always best when it comes to a broken heart.

I now do more of what fills my heart with love, joy, and hope. It sounds corny but it works for me. For instance I love children so now I take care of them. Their innocence and inquisitiveness is just the medicine I need. Shortly after she passed I took a soap making class with my other sister because that was something that Daryl had always wanted to do. We both enjoyed it. I’m glad I did it. I also talk about my sister without any kind of hesitation. If it makes others uncomfortable I could care less. My mom has keep her voice on her answering machine. That makes her happy so it’s all good to me. I have recorded that message and when I want to hear her voice I play it. Whatever works I do.

One last thing I saw a video (see below) that shows a scribbled mess that covers the entire page. Then the scribbled section gets smaller as your life grows. Grief never goes away but it gets smaller. This video has been invaluable to me. You have to fight to not drown in the grief. But no one is saying you have to be an Olympic swimmer. Floating, dog paddling, or just wading in the water is fine. Do whatever you need to do to keep on living and loving.

Valerie Lee, Moving Through the World At My Own Pace

I've worked in various capacities for multiple companies before finally arriving at calling myself a writer. I'm finishing a novel and have written a screenplay and am thinking about taking some film classes.

How to Handle Grief During the Holidays

Grief: The Monkey in the Room