Why The Hype Around Bootcamps?

In 2012, software development programs that range from 10 full-time weeks to 10 months of training became popular. These programs are known as “bootcamps.” Some of the bootcamps founded in 2012 include Devbootcamp, General Assembly, and Hack Reactor. These intensive programs teach aspiring developers how to code so that by the end of the program, students are ready to join tech companies. Last year, The Course Report (1) estimated that in 2016, the bootcamp market grew 1.7x, estimating around 18,000 graduates, up from around 10,000 from the previous year, totaling $200 million in total gross revenue. 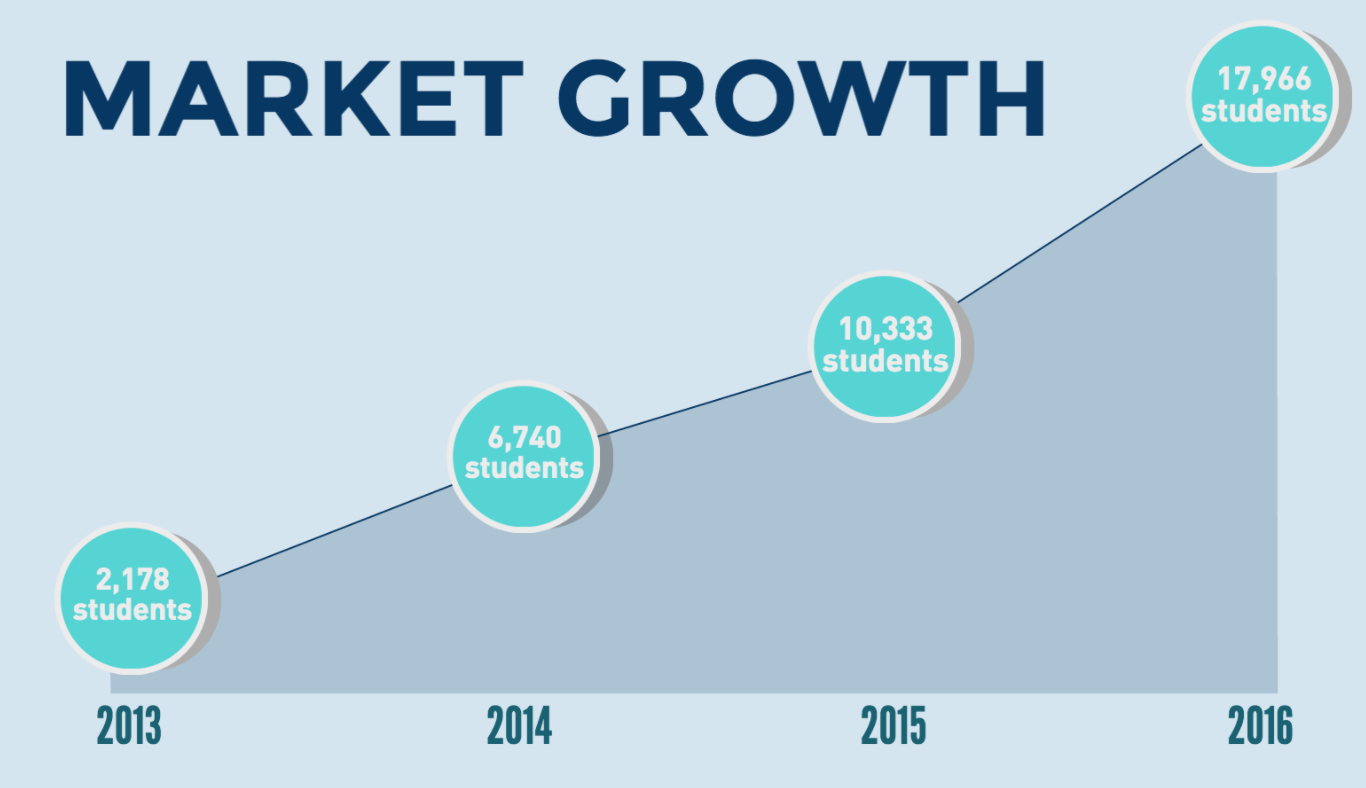 Today, coding bootcamps have gone beyond the San Francisco Bay Area. They have expanded to states like Washington, Colorado, Texas, North Carolina, and Illinois. In 2016, the sheer number of bootcamp grew to 95, compared to 69 in 2015, according to the Switchup (3). Millions of venture capital dollars have been invested into coding bootcamps with the hope that bootcamps will be the big education and marketing trend.

The success of bootcamps to date boils down to the shortage of talented developers and the desire for lucrative programming jobs.

The Developer Shortage In Silicon Valley

The demand for computer science hires continues to grow rapidly. The U.S. Bureau of Labor Statistics (4) claims that “employment of software developers is projected to grow 17% from 2014 to 2024, much faster than the average for all occupations.” It is no secret that the shortage of software developers in Silicon Valley is a real and growing problem.S

Fast-growing companies like Airbnb, Tesla, and Uber, are competing for day-to-day for the same talent. Corporate recruiters are struggling to find the best of the best. “We spent a lot of time at universities finding the best talent, but you are competing for them with other startups. We couldn’t rely on career fairs. We couldn’t find enough people to satisfy our yearly number of hires so we started looking for alternatives,” said Carolyn Shin, a former recruiter in San Francisco.

The traditional 4-year college computer science degrees are still fueling some of today’s coding jobs, but it’s still not enough.

The burden falls on university computer science programs to fill this labor gap.

The computer science degrees have grown through the last 5 years in response to the high demand for developers. From 2011 to 2015, computer majors increased by 95% and is still a leading STEM major, according to Fortune (6). The Computing Research Association reported that accredited U.S. universities graduated 61,000 undergraduate computer science students in 2015 (7).

Despite this unprecedented growth, there is still a huge demand for additional programming talent. Bootcamps have been a powerful source for some of that talent.

This year, “bootcamps are expecting to graduate nearly 4 times as many students as they did in 2014.” Switchup reported that around 24,000 students from 121 bootcamps are going to finish the program and become software developers this year (8). 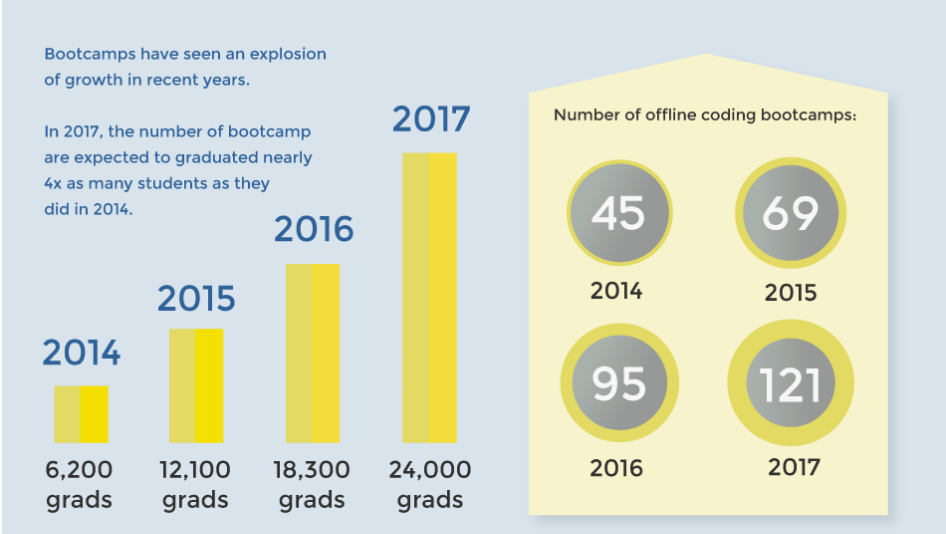 While only time will tell if bootcamps can fill the developer shortage faced by technology companies, many individuals have seen huge successes, from skill increases to salary bumps.

According to Switchup, “63% of bootcamp alumni reported an average $22,700 salary increase 6 months after graduation.” (10) The same study shows that 68% of 2016 graduates were working in their field within 6 months after graduation. Furthermore, studying at bootcamps cost less than half than the average four-year institution and takes only a few months of time. Four-year universities have more barriers to entry with long applications and large investments and bootcamps provide a strong alternative. A bootcamp, some information interviews, and a lot of networking can provide everything a young programmer needs to succeed.

Kadeem Palacios, a recent graduate of Make School (YC W12), is an example of a student who preferred the bootcamp experience over college. Palacios wanted to improve his coding skills and after a summer of learning decided to enroll in Make School’s 2-year program rather than returning to the University of California Santa Cruz. “I felt better about what I was learning and how I was learning it at Make School,” Palacios explained.

Whether it’s because of the growth of tech jobs or the attractive salaries, people are looking for programs that can help them get to the next point.

Will these coding bootcamps become the next ‘big thing’ in ed-tech and marketing?

Maybe. Why? The shortage of talent will still exist for the foreseeable few years. Alternative paths to learning these skills will be created in the next few years. There is one thing that we can be sure about. It’s clear that people are demanding new programs. They want more choices outside of the traditional 4-year university path.

3,8,9,10. Switchup.org: Are Coding Bootcamps Worth It? Job Placement, Market Analysis, and Projections

6. Fortune, Anne Fisher: The fastest-growing STEM major in the U.S.

Silvia is one of the few Peruvian Chinese immigrants working on the education problem in the United States. Because of her work with underserved youth in Los Angeles and experience with public schools in Peru, she has realized how similar both the American and Peruvian education systems are. She has spent the last year using her expertise in marketing to tackle the education problem in America.

Silvia is a social media expert, storyteller, and viral marketer who has created marketing campaigns that have reached millions of people organically. She is the social media specialist at the XQ Institute, a national nonprofit committed to rethink American high schools, create new learning opportunities for young people and open up the possibilities of the wider world.

Silvia joined the XQ Institute to combine powerful storytelling, social media, and design thinking to make education more accessible to every single person in this country.

Prior to XQ, Silvia was a content marketer at Startup Grind, the largest independent startup publication in the world inspiring and connecting 1,000,000 entrepreneurs. She led and grew the largest Medium publication about technology from zero to now 250,000+ readers. The publication includes writers like a technologist, venture capitalist, and New York Times bestseller Steve Blank and Twitter’s co-founder Biz Stone.

Yeva Hyusyan of SoloLearn: Be Yourself, Only Then Can You Realize Your Full Potential